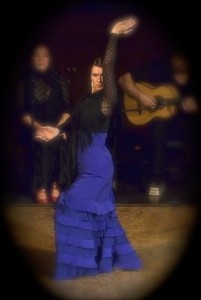 Maria has been studying and performing Flamenco for over 15 years. She has studied in Spain numerous times with respected and well-known Flamenco artists such as Juana Amaya, Pilar Ortega, Isabel Bayon, Farruquito and Rafael Campallo. Maria has attended many workshops in Canada with Alicia Marques, Christina Hall, Manuel Gutierrez and Belen Maya.

Before moving to Calgary, Maria danced with Grupo Alma Flamenca in Saskatoon from 2000-2004. Since 2009 she has performed and given workshops in Saskatoon as a guest artist.