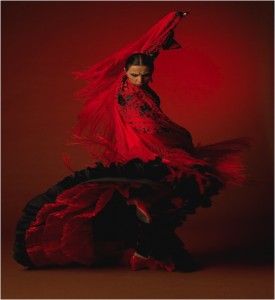 Annette Morcos had been, since 2003, one of Calgary’s pioneer flamenco performers and instructors. She strived to bring out the essence of this unique art form in her performances and through her teaching as director of Fineza flamenca Dance School.Over the years Annette had the privilege of studying with world-renowned Spanish artists in Spain in the cities of Madrid, Seville and Jerez de la Frontera (a city known as the “cradle of Flamenco”). These artists include: Matilde Coral, Milagro Menjibar, Rafael Campallo, Eva La Yerbabuena, Juana Amaya, Manolo Marin and la Tati among others. Annette has been living in Spain since October 2011.

Her interest in Flamenco is not limited to dance. Annette has studied Flamenco singing since 1996 with such teachers as Oscar Nieto, Carmen de la Torre in Seville, Juan Rodriquez in Madrid, Melchora Ortega in Jerez, Jesus Corbacho Vasquez and Jesus Flores in Seville. Her grasp of the techniques for singing Flamenco is facilitated by her knowledge of the Middle Eastern style of song and through her Mediterranean upbringing. In her youth, Annette also sang in several school choirs.

As a performer, Annette was a member of the Flamenco trio “Ocurrencia”. The group performed extensively during the span of two years at various public and private functions and was featured by the Calgary Guitar Society in their year 2000 concert series. She also performed with Peter Knight, a Calgary recording artist, and his Fuego Flamenco Ensemble at private and public functions including a performance at the Betty Mitchell Concert Hall and at the 2002 Canada Day Celebrations.

Annette is the founder of the Flamenco group, Salero Caló. Since its inception the group has performed at several private and public functions. (Look under Salero Caló Group link in this website for a more detailed summary of the group’s performance history).

In August 2003, Annette presented and performed in the highly successful “Spain Meets Canada” Concert which featured artists from Spain and Canada. In September 2004, she and a group of her students performed at the sold-out Rhythm of Peace – a Tango Show, held at the University of Calgary Theatre. In March 2005 her production of “Ritmos y Sonidos” was sold-out and in March 2006 she presented her third production “Enucuentros” featuring accomplished interenational guest artists from Phoenix and San Antonio.

The year 2007, saw a flurry of productions. Annette produced a three city tour of “Noche Flamenca” in Canmore, Edmonton and Red Deer and then produced “Raíces – A Journey through the Roots of Flamenco”. This work involved over 18 performers and was presented in May and November 2007; both were sold out performances. The concert took its audience on a journey exploring the roots of Flamenco. It featured accomplished local musicians and dancers as well as unique instrumentations. In December 2007, Annette Collaborated with the Calgary Men’s Choir in their production of “Guitarra – a Spanish Christmas Celebration”. In that same year Annette was invited as a guest performer in Alba Flamenco´s year end production in Saskatoon and at the Flamenco Caravan CD release concert in Thunder Bay, in April 2007.

In the Fall of 2008, Annette was the driving force behind the presentation of ‘El Sonido Del Silencio’, a three city tour that brought artists from Seville to Vancouver, Calgary, and Edmonton. Annette produced the two shows in Alberta.  Imagenes was Annette´s following production bringing together artists from Toronto and New Mexico.  On October 28 and 29  of 2010,  two performances were presented at the Beat Niq Jazz Bar featuring San Francisco based and Seville born singer, Felix de Lola.  Then in April 2011 Annette´s production of Luna Mora brought 3 Seville based artists to Calgary´s University of Calgary stage in a performance that highlighted in a few of its numbers the relationship between Flamenco and Arabic music.