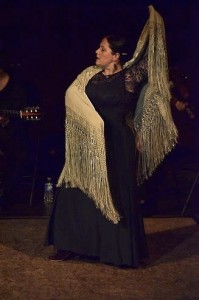 Francesca has been dancing Flamenco for the past fifteen years and has been privileged to study under many well respected Flamenco Artists from Canada, the U.S. Mexico and Spain. Francesca has also had the opportunity to study in Spain at the well known Flamenco school “Amor de Dios” in Madrid with the great master El Guito.

Since its inception in 2001, Francesca has performed with Calgary flamenco group Salero Caló, which has played a large role in cultivating the local flamenco scene in Calgary. She has also performed in several productions in the city with many of her flamenco friends and colleagues. Her most recent performance was in “There and Back Again” as a soloist in March 2015. She was also awarded an Alberta Foundation for the Arts grant in 2013 to support her dance studies at the Victoria Flamenco Festival.

Further to her performance and training experience in flamenco, Francesca has been teaching in Calgary at the Freehouse Dance Plus studio since 2010.